Enter your City name or Pincode

Yanam is a town in Yanam district of the Indian Union Territory of Puducherry. The government of Tamil Nadu has partial rights in administration here. It belongs to Andhra region. Kakinada, Ramachandrapuram and Amalapuram are some of the nearby cities from here. 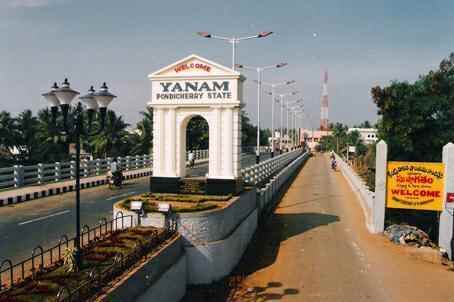 
History and Culture of Yanam

Before independence Yanam was a French colony. In 1954 it got united with India. It is still sometimes known as 'French Yanam'. Prior to French takeover in 1720s, it used to be a Dutch colony. French and Telugu are the popular local languages spoken here. French is also the official language here. The different festivals celebrated here include Sri Rajarajeswara Kalya?otsavalu, Venkanna Babu Kalya?otsavalu, Catholic Festival, Fête de Pondichéry and Brahmotsavam. As per the census of 2011, city has a population of 55,626. The city has a literacy rate of 79.47% .

Yanam is a beautiful place that attracts tourists and offers numerous options to indulge in tourism. There are many popular places of worship here that are frequently visited by people.

Sivalayam: This is a popular temple on the bank of Atreya Godavari and is dedicated to Lord Sri Rajarajeswara. Built by the Chalukya kings of Rajamahendravaram in the 15th century, Kalya?otsavam and Rathostavam have been performed here since old times. Kalya?otsavam Festival is celebrated here in the months of Jan-Feb.

Venkanna Babu Temple: This is a Lord Vishnu temple here named as Alivelu Manga Sametha Shri Venkateswara Alayam. The God here is known as "Venkanna Babu", hence the name of the temple.

Grand Mosque: It is a big mosque in Yanam where 200 people can pray at the same time. Ramzan, Bakrid and Milad un Nabi are celebrated here every year with a lot of enthusiasm.

Catholic church: This is a popular church here that was built by French missionaries in 1846. While the church is built in European style, the furniture and decoration articles have been imported here from France.

Yanam River Beach and Yanam Tower are other places of tourist attraction that can be visited here. Few hotels in this region helps tourists in providing decent accommodation while their stay in the city. There are also few restaurants serving delicious food to the residents and tourists alike in Yanam.

Healthcare services can be found in this part of Puducherry. One can find presence of hospitals, pathlabs, chemist shops and more here in Yanam. Both government hospitals and private clinics are present in Yanam. Some of them are listed below for reference.

Are you a Business Owner?

Add the products or services you offer